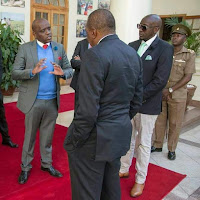 Friday February 14, 2020 - Digital strategist and State House blogger, Dennis Itumbi, has made chilling revelations on how easy it is to make big money through underhand dealings while working for President Uhuru Kenyatta.

Venting on social media, Itumbi narrated about an incident when he nearly fell for a deal that would have made him easy money.

He alleged that during his time at State House, he was approached by a person he considered a friend, with a deal that would see him earn Ksh30 million in 10 minutes.

All he had to do was offer the friend his office for the said period of time.

"A friend once called me, he had an idea of how I would make quick millions in an easy deal.”
“We all want money, so I drove to the Nairobi hotel.”

“The deal was simple.”

“The pay was massive Ksh15 million for a very easy job on my part.”

"All I needed to do is clear a list of three people to come see me in my office at State House, plus my friend and one more person," Itumbi recounted.

He was to allow the friend to take his seat as if it was his office and the entire operation was to last a maximum of 10 minutes.

His payment would then be delivered in two lawyer briefcases and in dollars.

"The deal looked too good. My role too easy," Itumbi confessed.

Better yet he was not going to be part of whatever would be discussed in the deal.

The visitors would not even be aware of his presence.

Itumbi said that immediately, he drove to the All Saints Cathedral to seek divine intervention or at least seek insight from God.

"No answer from God," Itumbi admitted.

This prompted him to further seek advice from two of his friends, who both asked him to do what he thought was right.

After 24 hours, Itumbi had not responded to the offer and admitted to struggling with the decision, but later declined to take the deal.