Is LEE NJIRU now supporting RUTO’s bid in 2022? See what he told MATIANGI, KIBICHO and Mt Kenya Mafia - The Hustler will laugh at this 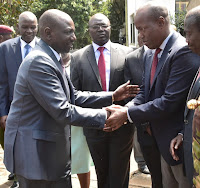 Wednesday, February 5, 2020 - The late Mzee Daniel Arap Moi’s Press Secretary Lee Njiru has cautioned perceived powerful individuals within the Presidency and warned them that they should not imagine power belongs to them.

Over the last two years, Interior Cabinet Secretary, Fred Matiang’i, and his Principal Secretary, Karanja Kibicho, have been behaving like power belongs to them.

The two powerful men with some hoodlums from Mt Kenya region have been ordering the arrest of journalists, bloggers, activists, MPs and even Governors to settle some political scores.

In an interview with Citizen TV on Tuesday, Njiru who worked with Moi for over 40 years told Matiangi and Kibicho to know that power is temporary and they are just messengers of the President.

“If you are an idiot you think it is your power.”

“It is called borrowed strength.”

“You are not a piece of the president.”

“You are just a messenger.”

“That is where people get it wrong.” Njiru stated.