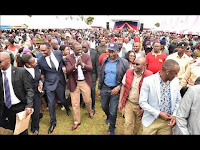 This follows yesterday’s BBI rally in Narok where the Maasai expressed their displeasure over land grabbing in Maasai land by people from other regions among other issues.

Led by Senator Ledama ole Kina, the Maasais sparked a national debate with their remarks regarding Maasais and their alleged exclusive right to land in the County, thus drawing a lot of criticism from Deputy President William Ruto.

Speaking at Thiru Secondary School in Laikipia West on Saturday, the DP condemned what he termed as divisive politics.

“I am going to stop Raila Odinga from dividing this country with his BBI nonsense.”

"I am the Deputy President of this country and I want to assure Kenya that they are free to do business everywhere in this country," he stated.

"We will not allow this country to be divided along tribal lines like has happened there before," he reiterated.

He added that the Senator's comments were primitive, criminal and foolish.

"We know who is behind this scheme and as leaders, we will stop him.”

“There is no way that one man can dictate to us where we will do business or contest for any political seat," DP Ruto announced.

The DP was accompanied by former Agriculture Cabinet Secretary, Mwangi Kiunjuri, and several other legislators during his funds drive in the region.