How UHURU, RAILA danced the night away at the UB40 concert in Carnivore - Nobody can stop reggae! (VIDEO) 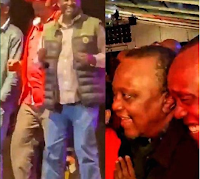 Sunday, February 2, 2020 - President Uhuru and ODM leader, Raila Odinga, were among reggae lovers who turned up for the UB40 concert at the Carnivore Grounds.

At some point, the two leaders who were in the company of Citizen TV anchor, Jeff Koinange, took to the stage and wowed the crowd with their dance moves.

Uhuru is known to be a big fan of reggae music and during a past interview, he revealed that UB40 was among his favorite reggae acts.
"I'm stuck in a certain age, my favorite musicians are UB40, Bob Marley and Gregory Isaacs," Uhuru said during an interview in 2011.

Despite tickets for the event going at Sh5,000 for ordinary passes, the concert was sold out.

Watch the videos from the event below.