Here is MIGUNA MIGUNA‘s message to Githeri media led by NTV, Citizen and KTN over MOI’s death - No wonder they are called ‘lipstick journalists’ 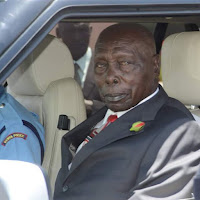 Moi, who served as President of Kenya from 1978 to 2002, died at the Nairobi Hospital after suffering for a long time.

Miguna, who was commenting on social media, chastised the media for interviewing turncoats like Uhuru Kenyatta and Raila Odinga instead of Moi’s detainees like renowned author, Prof Ngugi wa Thiongo, and lawyer John Khaminwa.

Thiongo and Khaminwa were detained by Moi during his 24-year tenure and they are yet to be interviewed by Githeri media.

“To @ntvkenya @citizentvkenyaand @KTNNewsKE: If you are interested in genuine and truthful account of Moi's legacy, interview those who survived his torture like Ngugi wa Thiong'o, Koigi, Khaminwa, yours truly and many others. We are still alive. Not turncoats like Raila only,” Miguna said.