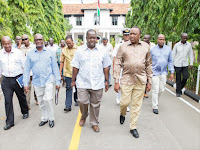 Since March 9th, 2018, Uhuru and Raila Odinga have been together and they have come up with a formula of expanding the Executive in the Building Bridges Initiative (BBI) by creating a position of a Prime Minister and two deputies.

"All other noise is Harmattan Winds in the desert!”,” Kipkorir said.

Kipkorir is among senior Kalenjin leaders who are opposed to Deputy President William Ruto’s presidency.