Hard Questions on Sergeant KIPYEGON’s death! This man must have been murdered to cover up the Ksh 39 billion arms scandal! Stop fooling Kenyans. 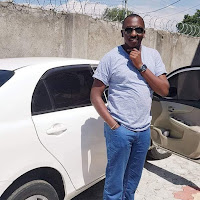 A Gunshot is not a bee sting:

Villa Franca Estate is one of the densely populated estate located off Mombasa Road at imara daima. The estate consists of 345 units of bungalows, maisonette and flats.
A police officer identified as Sgt. Kipyegon was found dead with a gun shot on his chin, bullet exiting from back of his head with spatter on the roof in a house inside the Villa Franca estate, this was after foul smell being felt by the neighbors.
According to the preliminary scene of crime investigations, the officer shot himself.
The suspected tool of crime being a Jericho Pistol belonging to the Police Service, assigned to the officer.
A spent cartridge suspected to be from his gun was recovered at the scene.
The main pointer that the crime committed was suicide is a suspected suicide note directing calls to his relatives through numbers written on the paper.
As a matter of policy,
officers living within and off their assigned police station should always return their arms back to the station armoury after duty.

Alive to the fact that imara Daima is a densely populated area, what is the routine and modus operandi of the residents of villa Franca estate?
Did anyone (adult or Child) hear a gunshot sound in the neighborhood?
A Jericho Pistol fired without a silencer can produce sound over 175 dB (Decibels), enough to be heard over 500M radius away.

Was the estate empty when Sgt Kipyegon killed himself via a gunshot?
When was the Officer last seen entering the estate or his house?
Are the Villa Franca Estate gates manned by security guards? Did they record his entrance? Did they record entrance and exit of a stranger after him or within the day? Are there CCTV cameras near or within the estate?
Whom did Kipyegon Last talk to?
While dead bodies narrate a story, these are questions that can help interpret the story.
The dead talk.
May he rest but give his story.
By KIYO NGANGA