Flamboyant Gospel singer PAPA DENNIS is dead – His body was found in Pangani near Jubilee Headquarters. 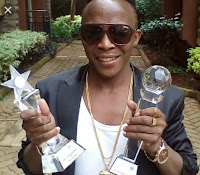 The award winning singer died on Friday night in controversial circumstances and his body was found in Pangani near Jubilee Party Headquarters.

According to reports, the singer was in a studio session at Nairobi Records, owned by producer Mash Mjukuu, when he allegedly stormed out of the room and fell from the 7th floor of the building and died on the spot.


Veteran Gospel singer, Daddy Owen, was among the first people on the scene and he took to twitter to confirm the tragic news.

“When I 1st heard about his passing I rushed to the scene just to confirm its true.. reaching I found like only 4 people there n they pointed at a lifeless body which I had to confirm is Papa Dennis. Was a very sad scene. RIP Papa. I will share more soon.” Owen posted on twitter.

It is not clear if he was pushed from the building or he committed suicide.