Corrupt Nairobi Governor MIKE SONKO has threatened to kill me - ODM legislator says his life is in danger as he reveals how SONKO wanted to steal Sh 1.4 billion 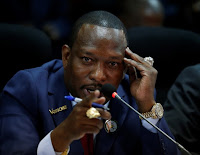 Friday February 7, 2020 - An Orange Democratic Movement (ODM) legislator from Nairobi County Government has said that his life is in danger after embattled Nairobi Governor, Mike Sonko, threatened him.

Speaking after recording a statement at Nairobi Central Police Station, Nairobi County Assembly Minority Leader, Peter Imwatok, alleged that three men approached him on Wednesday in the morning near Ankara Hotel while heading to his office and flushed guns at him.

He claimed that the individuals warned him to stop talking about the County Executive and in particular impeachment plans, or else he will lose his life.

The Makongeni MCA added that the three men, together with a prominent Nairobi police officer, received instructions last Friday to eliminate him forcing him to report the threat to his life to the police.

“I am looking forward to the police calling the numbers of the hired assassins to come and record statements,” said Mr Imwatok.

The ODM elected MCA attributed his woes to his firm stance on the rule of law, corruption as well as an alleged plan to use the Sh1.4 billion given by National Treasury for pending bills to be used to pay lawyers instead of paying small scale traders in the capital.