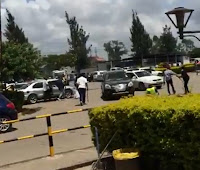 The rider, who has been identified as Daniel Mburu, was ferrying an injured child to the facility for treatment on Tuesday when a disagreement ensued between him and the cop.

According to witnesses, the officer was infuriated after Mburu allegedly parked his motorcycle at the wrong spot.

This led to an argument that escalated quickly culminating into a sad incident after the trigger happy officer drew his gun and shot the rider at point-blank range killing him on the spot.

Members of the public started charging at the yet to be identified officer who fled the scene.

Officers from the police post that is next to the hospital were forced to fire in the air to disperse rowdy youth who mounted protests inside the facility.