At last former CJ WILLY MUTUNGA opens up on his relationship with Supreme Court Judge, Justice NJOKI NDUNG’U, and spills all the beans! 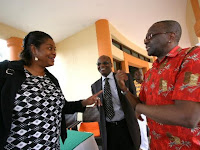 This is in relation to a case in which Justice Ndung’u is challenging the Judicial Service Commission’s decision to reprimand her over misconduct.

Mutunga was testifying against Justice Ndung’u who chose to go on strike over JSC’s decision to fix judges’ mandatory retirement age at 70.

Justices Ndung’u, Jackton Ojwang and Mohamed Ibrahim were alleged to have gone on strike for two weeks in September 2015.

Mutunga swore an affidavit in support of JSC saying the alleged strike crippled the Judiciary for two weeks.

However, he told Justice Weldon Korir that he learnt of the alleged strike from Supreme Court Registrar, Ann Asuga.

“Asuga is the one who informed me that the three judges were not working,” he told the court.

The former CJ, however, denied that the case was personal between him and his former colleague.