You will be very worried if you knew the zombies that are ruling Kenya - Not despot UHURU or RAILA ODINGA the conman! 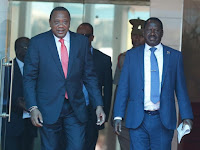 Monday January 13, 2020 - Kayole based televangelist, Pastor Godfrey Migwi, has revealed the names of individuals currently running the show in the country.

According to Migwi, President Uhuru Kenyatta and Orange Democratic Movement party leader, Raila Odinga, are just like other Kenyans.

He said the dead spirits of late Mzee Jomo Kenyatta and Jaramogi Oginga are ruling from the grave.

“This is the worst time in Kenyan history, It’s revealed spiritually that there’s two strong spirits from the grave, the spirit of first Kenyan Prime Minister and President Jomo Kenyatta and the spirit of Kenyan first Vice President Oginga odinga, they’re ruling us from the grave using their sons and they want to continue to rule us through handshake and BBI,” Migwi said on Sunday.
Migwi also stated that the second phase of Building Bridges Initiative (BBI) which is underway is the ‘secret’ formulae being framed to ensure that President Uhuru Kenyatta remains in power after 2022.

“Kenyans agreed with it (the first phase of BBI) fully but let me assure you the second phase or may be the third phase of BBI which is being manufactured behind doors to favor Uhuru and Raila will tear out this country.”

“According to them referendum is on the way this year just to make sure they remain in power and powerful to stop anyone else from rising to power.”

“They want to rule us by force, I call it political rape,” he stated.