Want to buy a gun in Kenya? MATIANG’I now reveals the only dealers mandated to sell guns in the country 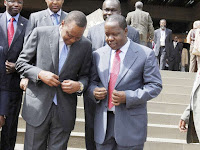 Thursday January 16, 2020 - Interior Cabinet Secretary, Fred Matiang'i, has halted the licensing of guns dealers in a bid to regulate gun holding by private citizens in the country.

The CS disclosed this information to Kenyans adding that 18 dealers had been shut down over the past months in a crackdown after they were found to lack proper authorization.

"We had 33 dealers and we have managed to narrow them down to 15.”
“We shall continue to mop up all the illegal operators and those who own firearms illegally,” he stated.

"Last year, we instituted new procedures in acquisition and holding of civilian firearms to ensure only those properly vetted and found to be in need of these firearms acquire them in the right calibre, form and quantity.”

The CS went on to announce a ban on the licensing of new gun dealers effective immediately.

He explained that a majority of the gun dealers acquire the guns unprocedurally and end up in the hands of criminals.

"This exercise continues this year, with even greater zeal.”

“I have therefore directed the suspension of licensing of new firearm dealers until the National Security Council reviews the matter." he stated.