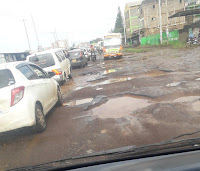 Wednesday, January 16, 2020 - Nairobi Senator, Johnston Sakaja, has said that the Government has released Sh300 million for the reconstruction of impassable Mwiki-Kasarani Road.

The amount released is part of the Sh1.7 billion that the Government has set aside to repair 130 kilometers of roads.

During the meeting, Sakaja said a team and machinery have already been sent to the area to make the road accessible as more action follows.

"We have already sent a team and the machinery to Mwiki to make the road passable for now as we prepare for full work," Sakaja said.
The intervention comes as strike enters its fourth day in Kasarani as matatu operators plying the Mwiki route protested the poor state of the road.

Since Monday, matatu operators who are tired of regular breakdowns from the pathetic road blocked all the routes leading to Thika Superhighway.

Residents are forced to brace the morning rain as they walk long distances to Roysambu where they board matatus from other areas.

One protester died on Wednesday after a rogue police officer shot him at the chest during the demonstrations that rocked Kasarani and Mwiki Estates.