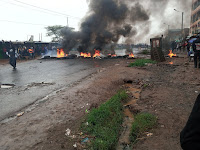 Wednesday January 15, 2020 - In 2017, Siaya Senator James Orengo stood on a point of order and offered free advice to Jubilee Party sycophants who were sitting at the floor of the Senate.

At the time, Jubilee legislators led by Elgeyo Marakwet, Kipchumba Murkomen and nominated Senator, Beth Mugo, had tabled a contentious Election Laws (Amendment) Bill that the opposition was fighting against.

In his prophetic advice, Orengo who is currently the Minority Leader in the Senate warned Jubilee adherents on how Governments in power behave, warning them that they will one day pay for their ‘sins’.

“Sometimes revolutions eat their children, Governments eat their own people, and this Government is going to punish you more than they will punish me.”
“I’m telling you, in another one year, you will be crying in my office for me to come and represent you.”

“I know, I can tell,” Orengo thundered

Now Jubilee Party leaders and supporters are being whipped like dogs by the regime they voted for in 2013 and twice in 2017.

On Wednesday morning, General Service Unit (GSU) officers were dispatched to Kasarani and Mwiki areas in Nairobi where they beat poor residents for demonstrating over the poor state of roads.

Mwiki and Kasarani are President Uhuru Kenyatta‘s strongholds in Nairobi and residents (majority being Kikuyus) were engaging in running battles with GSU.

Water cannons, teargas, and live bullets were used as police tried to quell the bloody demonstrations.