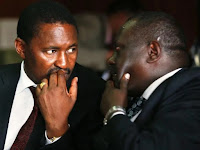 The security detail was withdrawn and asked to go back to Nairobi for another assignment.

Laikipia residents led by MP Amin Deddy have lauded the President for sacking Kiunjuri from his Government.

Speaking at the Nanyuki Central Park, Deddy said that the President tolerated the CS for too long, adding that his sacking came at the right time of the year.

"As residents of Laikipia East, we totally support the decision by the President to sack Kiunjuri.”

“We have over the years been affected by bad leadership from our brother Kiunjuri,” Deddy said.

The former CS thanked the President for giving him the chance to serve in his Government moments after he was fired.

He also said that he was leaving his office head high because he had played his part in the Government.

He insisted that he made no mistake that warranted sacking but promised to make a comeback into the field of politics.