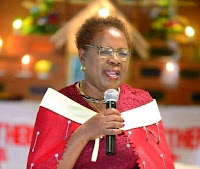 Monday January 6, 2020 - Kandara Member of Parliament, Alice Muthoni, has claimed that the Government is planning to arrest her over a pronouncement she made last week where she criticised President Uhuru Kenyatta.

In an interview with a local TV station on Monday, Wahome said that the police sought her in Kandara but they did not find her there.

Wahome noted that she is informed about a plan to get her behind bars, adding that she will not take it lightly at all.

The outspoken lawmaker said that she will not allow anyone to intimidate her for speaking the truth.
"I will advance the course of democracy, expansion, and protection of democracy in this country.”

“I will continue, I will not agree to be intimidated.”

“I think that there is a plan to arrest me because as I said when they found out that I was not there is Kenol, they just went back.”

“What an irony, the police should be busy working for Kenyans,” Wahome said.

The lawmaker has been on the spot since she claimed that President Uhuru Kenyatta is a threat to Kenya’s democracy and economic prosperity.