UHURU and MATIANG’I are innocent! MOSES KURIA now reveals the man frustrating MIGUNA – He fears MIGUNA like hell and don’t want him in the country 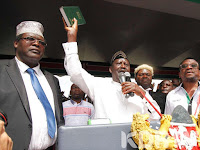 He said that President Uhuru Kenyatta had nothing to do with Miguna's frustrations as he tries to jet back into the country.

"The President talked about allowing Miguna in the country during the late Rubia's burial and he meant every word of it.”
“I have information that the person who is behind Miguna's tribulations is Raila Odinga," Kuria opined.

The Gatundu South legislator requested the Government to obey court orders and allow him back in the country.

Miguna, during his second attempt to return to Kenya, was disembarked from a plane en route to Nairobi under unclear circumstances, moments after he boarded an Air France flight destined for Nairobi.

He was also ejected from a Lufthansa flight for the same reason.

President Uhuru Kenyatta had already set the stage for Miguna to return to Kenya only to be turned away from two airports in Europe over the red alert issued against the NRM General.