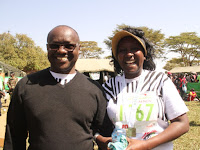 A court in Nairobi gave a ruling last week, ending their troubled marriage.

The Women Rep was given a favourable ruling allowing her to keep their lavish home in Kitisuru Estate, Nairobi, and their farm in Uasin Gishu.

The ruling is a big relief to the Women Rep, who previously obtained orders barring her husband from their matrimonial home in Kitusuru.
This was after he eloped with a junior employee at Standard Group by the name Faith Rono and lived at her apartment along Thika Road.

The ruling might also be a relief to Sam Shollei, who once caught his wife having sex with their energetic Kisii shamba boy at their upcountry home in Uasin Gishu.

Being a licensed gun holder, Sam shot the shamba boy after catching him on top of his wife.

The young man sustained gunshot wounds but the matter was swept under the carpet after he used his influence as the then Managing Director at Standard Media Group to kill the case.