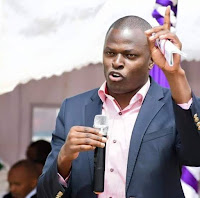 Tuesday January 7, 2020 - Kiharu lawmaker, Ndindi Nyoro, has said that he will not respond to former Jubilee Party Vice Chair, David Murathe, over his remarks regarding President Uhuru Kenyatta.

This is after Murathe claimed that President Uhuru Kenyatta might come back as a Prime Minister after his retirement in 2022.

When reached for his opinion regarding the remarks, the first-term lawmaker stated that to him, Murathe doesn't deserve a response, suggesting that 'he is a nobody to him.”
“Who is Murathe?"

"He is not worth my response and he can say what he wants."

"His opinion does not matter to anyone,” he remarked.

On the other hand, Bungoma Senator Moses Wetangula doubted if Murathe's remarks have any truth in them saying that they could be just rumours which have no basis.

The Ford Kenya Party leader pointed out that the President can only serve two terms constitutionally, and coming back would not be a prudent thing to do.

"I am not sure this is what Uhuru plans to do, I am not privy to the facts."

"These could be just sterile imaginations, rumour mills and innuendos."

"When Uhuru comes out to say he wants to vie again, we tell him not to,” he said.