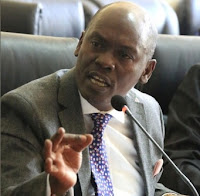 Mwangi was sacked from the Cabinet on Tuesday and pundits said that it is because of his association with Dr William Ruto.

But Kabogo argued on Wednesday that DP Ruto is not dumb to pick Kiunjiri who has publicly demonstrated that he lacks intelligence.

“When a guy has demonstrated having great lack of intelligence.”

“How! My take. (See the tweets trending yesterday.)," Kabogo said.

The former flamboyant Governor was reacting to a post by a local newspaper where they had asked whether the President Uhuru Kenyatta had just sacked Mwangi Kiunjuri because of his association with the DP.