The more UHURU and RAILA embarrass RUTO the more he gets closer in becoming the fifth President – Mt Kenya region is fully behind the hustler!! 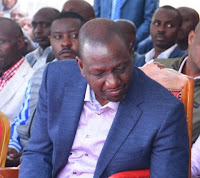 In an opinion piece in a local daily on Monday, Shitemi said Uhuru and ODM party leader, Raila Odinga, will be embarrassed badly in 2022 should they continue to embarrass the second in command.

According to Shitemi, the continued attacks against the DP by the anti-Ruto gang is only making Dr. Ruto strong.

This is because he will use his perceived humiliation in the hands of Uhuru and Raila Odinga’s men to win sympathy votes come 2022.
“The more the anti-Ruto gang paints him as corrupt and frustrate him in public, the more they position him as the people's candidate.”

The analyst's comments come just after it emerged that the DP had been denied access to his official residence in Mombasa, something that has elicited mixed reactions within the political circles.