Thank you UHURU and MATIANG'I for teargasing RUTO's allies who were pushing for KURIA’s release; this is not a banana republic - CHERUIYOT shocks Kenyans 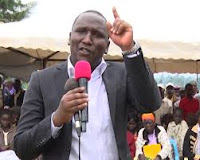 The Tanga Tanga supporters were there to demand for the release of Gatundu South Member of Parliament Moses Kuria.

"I sympathise with our police officers, I wouldn’t want to be the one castigating them.”

“For them to have teargased us, somebody was angry somewhere and made a phone call," he said.