Thank you God for giving us RAILA and UHURU, with their BBI referendum looming, I might be in for another third term - RUTO’s Governor, MANDAGO, shocks the nation 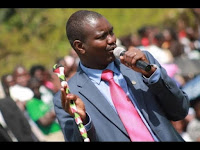 Friday January 10, 2020 - Flamboyant Uasin Gishu County Governor, Jackson Mandago, has surprised many Kenyans after he was heard saying that he might be on the ballot come 2020.

In a video clip circulated online, Mandago is seen saying that the implementation of the Building Bridges Initiative, BBI, will grant him another opportunity to run for an elective position.

Mandago, in his speech, is seen telling residents that BBI is not about them but rather about those occupying elective positions.

"This BBI is not about you, it’s all about us.”
“Some of us were already preparing to go home but with referendum around the corner, I might be in for another fresh 5 years," stated Mandago as captured in the video.

He sarcastically said that God does wonders and gives an example of Moi who had to extend his term for another 10 years after the referendum.

"For sure God does wonders, with the BBI referendum looming, I might have another 5 fresh years.”

“Even Moi had to extend his term for another 10 good years after the Constitution was changed through a referendum," he stated.

The second term Governor had his audience burst into laughter when he referred to the bible quoting "behold the old has gone and the new has come so if the new BBI comes even me, it will another 5 fresh."

Mandago is set to pack his belongings at the end of this term as the Constitution only allows a Governor to serve for only two terms.