Shock as UHURU waves at an empty crowd in Nyandarua - The residents have rejected him and Dr. WILLIAM RUTO is the new king in town!!

Friday, January 31, 2020 - President Uhuru Kenyatta was spotted on Friday waving to a nearly non-existent crowd when he arrived in Nyandarua to launch the construction of the Naivasha to Njabini Road.

Uhuru landed at Githioro using his chopper and was ushered to the County by Nyandarua Governor, Francis Kimemia, and a few busybodies.

Uhuru’s visit to the region comes even as locals continue accusing the President of neglecting the region after winning a second term in office.
According to residents, many leaders in the region, as well as voters, are unhappy with how Uhuru is treating the Mt Kenya vote block.

“He is mistreating the people who stood with him."

"Mt Kenya and the Rift Valley stood with him in 2013 and 2017, but now he is telling us that Raila is more important than everybody else,” said a source. 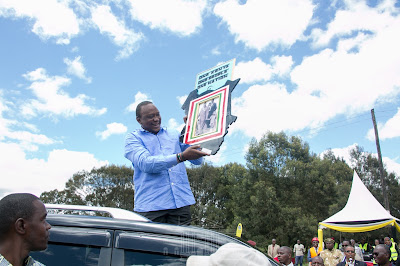 Two Governors and a Senator from the region also expressed concerns over Uhuru’s ‘new trend’.

“He has a new trend where he is forgetting about those who stood with him under thick and thin."

"We are not happy also with his quietness when his people like Murathe are attacking the Deputy President,” a Governor said.