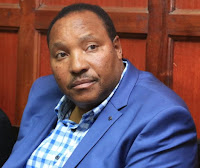 Tuesday January 28, 2020 - Muranga Senator, Irungu Kangata, and his nominated counterpart, Isaac Mwaura, have asked the Senate not to be biased while determining the fate of Kiambu Governor, Ferdinand Waititu.

Speaking on Tuesday, Mwaura said Kiambu residents will be following proceedings in the Senate closely, to see the Senators who will stand with or betray them in their pursuit for justice.

“Today is very important for Kiambu people who want to see justice for all the money that has been stolen from them.”

“Senate is on trial and we want to know who are our true friends or enemies.”

“Defend devolution, stand with the truth.”

“The people are watching," Mwaura tweeted.

Waititu will be tried by the whole plenary on Tuesday and Wednesday after a motion by Senate Majority Leader, Kipchumba Murkomen, that sought to form an 11-member special committee to investigate charges against him was shot down by Senators last week.

Mwaura and Kangata were among those who opposed the formation of a special committee claiming that it was a plot to save the County boss from impeachment.

Kangata said Waititu is a patented looter of public money and should be sent home for good by the Senate.