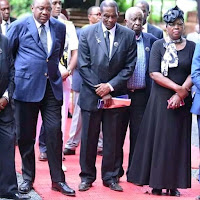 Saturday January 4, 2020 - Muranga County Women Representative, Sabina Wa Chege, has made remarks that may be construed to mean that President Uhuru Kenyatta is no longer popular in Mt Kenya region.

Speaking on Friday, Chege said Kandara lawmaker, Alice Wahome, had organised some goons to heckle the President during the burial of second liberation hero, Charles Rubia, in Kandara, Murang'a County on Monday.

Sabina said Wahome is throwing tantrums at the President after her plan flopped because the National Intelligence Service (NIS) was aware of her plans.
“We know what had been planned but things did not go as planned and that’s why she is very bitter,” Chege said.

She also bashed Wahome and other Mt Kenya lawmakers allied to Deputy President William Ruto of being unfair in their attacks against Uhuru, over his alleged failure to deliver.

According to Chege, given that both Uhuru and Ruto are together at the helm of the Government, the Ruto camp, alias Tanga Tanga, should also direct their attacks at the DP.

"We don’t have two Governments and thus the leaders should not be attacking Uhuru alone,” she said.