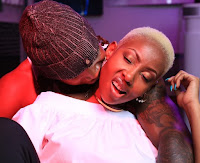 Rachel and four others are accused of assaulting an upcoming musician and robbing him a wristwatch worth Sh35, 000, two silver chains valued at Sh65, 000 and Sh3, 600 in cash.

The victim revealed that Rachel and four heavily built guys pounced on him and assaulted him for hours before locking him up in the boot of his car when he was dropping off his friend, Peter alias Miracle Baby of the Sailors group.

Mwalimu Rachel is the manager of the popular Gengetone music group.

The charge sheet showed that the media personality committed the crime on January 17th, in Kinoo, Kiambu County.

On January 24, the radio host was arrested and detained at Kinoo Police Station after the victim pressed charges.

She was later released after opting for an out-of-court settlement but the matter hit a dead end.

She was arraigned at Kikuyu Law Courts on Friday where she was charged with robbery with violence but pleaded not guilty.

She was released on a Ksh10, 000 cash bail and the next hearing set for February 13th.
If found guilty, the mother of one faces a minimum of 10 years in jail.