Thursday, January 9, 2020 - Queen Elizabeth has termed the decision by Prince Harry and Meghan Markle to step down from their roles as senior members of the Royal Family as a ‘complicated issue’

The Duke and Duchess of Sussex put out a statement on social media on Wednesday evening, saying that they have made the decision "after many months of reflection and internal discussions."

They also said that they will be working towards being "financially independent."

This means that they will give up their income from the Sovereign Grant said to be the taxpayers' money given to the Queen every year.
Queen Elizabeth responded to their announcement and called it a “complicated issue.”

'Discussions with the Duke and Duchess of Sussex are at an early stage."

"We understand their desire to take a different approach, but these are complicated issues that will take time to work though,'' the statement from Buckingham Palace read.

The announcement has drawn out mixed reactions with controversial British journalist, Piers Morgan, blaming Meghan Markle, for ''breaking up the royal family''

“People say I'm too critical of Meghan Markle - but she ditched her family, ditched her Dad, ditched most of her old friends, split Harry from William & has now split him from the Royal Family.I rest my case.” 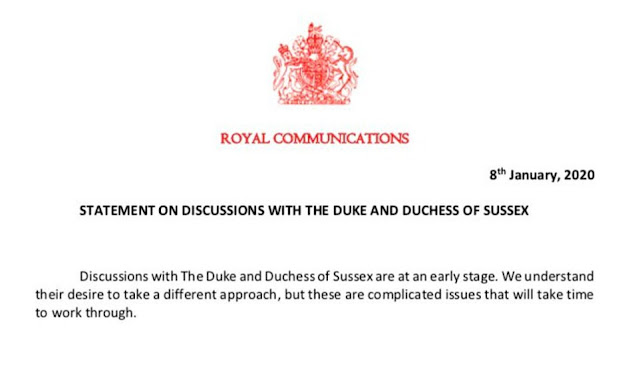