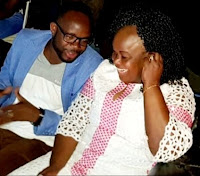 Monday, January 6, 2020 - There was drama at a high end city hotel after Raila Odinga’s former aide, Silas Jakakimba, exchanged kicks and blows with a man, after he busted him with his lover.

The soft spoken lawyer and former aspirant for the Homa Bay Senate seat stormed the posh hotel in Hurlingham breathing fire after learning that his lover had been spotted with another man.

Silas confronted the man accusing him of invading his territory and trying to destroy his relationship, resulting to a fierce fight that left patrons stunned.

The Kenyan DAILY POST understands that the drama lasted for about 10 minutes before the two men were separated.
Despite Silas Jakakimba’s flourishing career, money and good looks, his love-life is jinxed.
In 2018, the 36 year old lawyer took to his facebook page and exposed his cheating wife, accusing her of sleeping with a wealthy and elderly Parliamentary employee identified as Sam Obudo, the boss of his lawyer wife in Parliament, where she works as a Legal Officer.

Jakakimba accused Sam of sleeping with his wife and sending him death threats.

He narrated to his facebook followers how Obudo has been sleeping with his wife barely months after she gave birth, besides threatening his life in the presence of police officers when they bumped into each other at a hotel in Homa Bay.

The former aide later divorced his cheating wife and landed another hot lady, who is also giving him sleepless nights after finding out that she is spreading her legs to other men.