Outrage as the rare Osprey bird that flew over 6,000 kms from Finland to Kenya dies of starvation under the care of KWS!

Monday, January 27, 2020 – A rare migratory Osprey bird that flew over 6000kms from Finland to Kenya has died under the care of Kenya Wildlife Service (KWS).

According to KWS veterinarians, the four-year-old bird of prey known as Osprey died while undergoing rehabilitation at the KWS-licensed Raptor Rehabilitation Centre in Karen.

“By the time the bird was delivered to the city, it had been severely dehydrated, weak and emaciated from the long flight and minor injuries while trapped by the fishing net.”

The bird was rescued last week in Siaya by a member of the community, Walter Oloo, who spotted it on January 20th, 2020, and reported to the wildlife body in the area.

It was delivered to the KWS Veterinary Department in Nairobi on January 23, 2020, and was later transferred to the Raptor Rehabilitation Center in Karen.

Kenyans have however reacted with fury and anger accusing KWS officers of being incompetent and not doing enough to save the rare raptor bird.

Read the statement from KWS the reaction below. 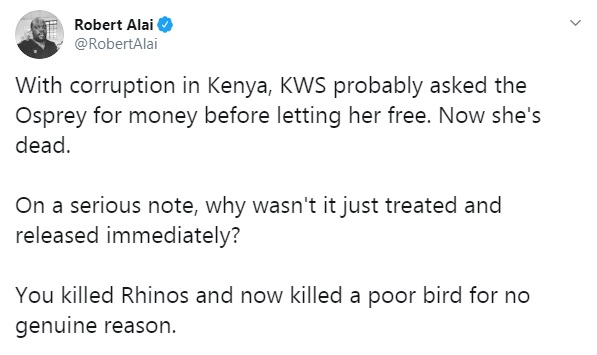