Never trust the KENYATTA family! See what it did to MOSES KURIA after using him - RAILA should start getting worried over his friendship with UHURU 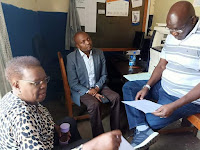 In an interview with the media, Kuria narrated about events that set him and President Kenyatta on separate paths.

First, he said that the ruling party had been infiltrated by outsiders.

Kuria stated that he did not understand why that had happened but felt that they shared different ambitions.

"All of a sudden, the space was occupied by people from nowhere, who did not know why we wanted to win the election and what we wanted to do in Government," Kuria stated.
"I was banished to Siberia and was jobless until I found myself in Parliament in August 2014, courtesy of a by-election following the demise of MP Joseph Ngugi," he added.

Kuria also said that prior to the General Elections, people he believed to be relatives of President Kenyatta financed a campaign against him.

"First, forces I believe are from the President's closest relatives sponsored candidates against me in Gatundu South," Kuria claimed.

He alleged that the year's party nominations were even doctored to lock him out of vying for re-election.

"I'm not sure I have fully recovered from that treachery," Kuria stated.

Besides, he noted that his loud mouth and condemning Uhuru for not doing much for Kikuyus really upset the status quo and set him against the President.