My meeting with RUTO in Khartoum Airport was coincidental, I just bumped into him - KALONZO says and begs UHURU to forgive him 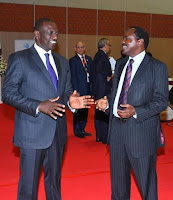 Kalonzo and Dr William Ruto met in the North African nation on Tuesday with details of the DP's trip remaining scanty.

But Mr Musyoka, who was in Sudan, says he spontaneously met the DP at Khartoum Airport and both were on different missions.

After their meeting, he says, he flew to South Sudan in Juba where he has been leading talks for a transitional Government.

“I was on my official mission as the Special Envoy in South Sudan and we just bumped into one other with the DP at Khartoum Airport,” Kalonzo said.
“Nothing pre-planned happened.”

“There was no meeting at all.”

“It is a desperate attempt to say the meeting was pre-planned.”

“The DP was in the company of Kapseret MP Oscar Sudi.”

The former Vice President said those trying to say that he had a meeting with Ruto want to create enmity between him and President Uhuru Kenyatta.