My life is in danger! KIPCHUMBA MURKOMEN now reveals what RAILA’s goons are planning to do to him during the BBI rally in Mombasa tomorrow 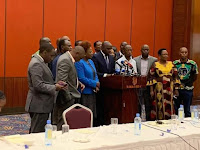 Murkomen alleged that he was on the receiving end of threats regarding the Building Bridges Initiatives consultative forum in Mombasa on Saturday, January 25th.

The Elgeyo Marakwet Senator claimed that he had been informed that he will not be recognised during the forum, and will be humiliated.

In his message, Murkomen questioned the agenda of the forum, or rather why he was threatened, yet the BBI advocates for inclusivity.

"If that’s what it takes to unite this country so be it and I am ready to absorb. Tukutane Mombasa," he stated.
This comes even as Murkomen led a section of Jubilee Party leaders allied to Deputy President William Ruto who were initially opposed to the BBI to a press conference to reiterate their support for the BBI and stated that they will attend all the remaining BBI consultative forums.

"We will be participating in all public BBI rallies across the country and this weekend, we will be in Mombasa together with the BBI team," he declared.

His declaration invited caution from front row BBI political leaders including Mombasa Governor Hassan Joho, who warned the Senate Majority Leader and fellow legislators against harbouring any ill motives against the process.

Joho sent a stern warning to anyone seeking to disrupt the meeting.

"Let them be made aware that they can joke anywhere else in the country but it shall not be in Mombasa," he remarked.

A similar warning was issued by Suna East MP, Junet Mohammed, who welcomed Murkomen and other leaders of the Tanga Tanga faction of Jubilee to the forums but warned them against undermining the meeting.

“But if they are coming to attempt to undermine the meeting or cause chaos, then we are prepared for them.”

“But if they are coming in good faith, then we are welcoming them just like other Kenyans because this is an open public meeting,” Mohammed stated.