MOSES KURIA goes on a hunger strike to protest his arrest and detention at Kilimani Police Station. 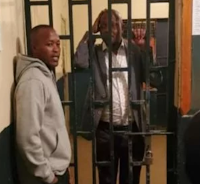 The controversial legislator was arrested and locked up on Friday for assaulting a female activist.

According to Kikuyu MP, Kimani Ichung’wa, Kuria has refused to eat to protest his continued detention despite securing a Sh50,000 cash bail on Friday.
Speaking to the media, Ichungwa said: “We have seen Moses Kuria and he is still at Kilimani Police Station."

"We have come because as we said on Friday, he is apprehensive of his own security at the police station."

“In fact, he has indicated to us that he has not been able to eat and he has said he is going on a hunger strike until the rule of law is restored and court orders respected in the country,”

Meanwhile, Kiharu MP, Ndindi Nyoro, has accused Interior Cabinet Secretary, Fred Matiang’i, and his Principal Secretary, Karanja Kibicho, of cracking down on political leaders perceived to be working closely with the DP.

“It is then that he was told they will deal with him."

"They looked for scandals in CDF and when they did not find any, they arrested him over something that happened over a month ago."

“Kuria has been arrested for the same reasons I was also arrested and those allied to DP Ruto,” said Mr Nyoro.