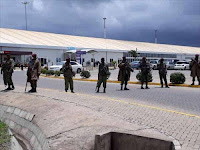 Tuesday January 7, 2020 - The Government through the Directorate of Immigration Services has issued a statement confirming that it will facilitate Miguna Miguna's return.

"This is to confirm that in compliance with the court orders issued on December 14th, 2018, the Directorate will facilitate Dr Miguna's re-entry into Kenya," the Government declared.

This came after Justice Weldon Korir issued several orders seeking to ensure the National Resistance Movement (NRM) leader, Miguna Miguna's scheduled return to the country on Tuesday, January 7, was not interfered with.
Miguna's lawyer, John Khaminwa, had moved to court to have Miguna protected from the State's heavy-handedness as was witnessed at the Jomo Kenyatta International Airport (JKIA) when the fiery lawyer last tried to return on March 26th, 2018.

"The court issued an order restraining senior State officials or their agents from interfering in any way whatsoever with the petitioner's entry into Kenya on January 7 or any other date," Khaminwa stated.

Khaminwa disclosed that he will be at JKIA to welcome Miguna, with the court also having issued another order guaranteeing him access to his client.

Officials from the Kenya National Commission of Human Rights (KHNCR) will also be present.