MIGUNA unmasks UHURU's new Foreign Affairs CS, RAYCHELLE OMAMO - See the scandal she had in France when she was ambassador! This woman is an embarrassment 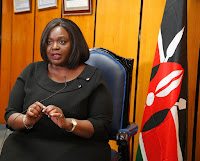 The exercise saw movement of some Cabinet Secretaries while others like Agriculture CS Mwangi Kiunjuri were totally dropped.

Among those moved is Defence CS Raychelle Omamo, who was moved to the powerful Foreign Affairs docket.

According to Miguna, Omamo is a drunkard and will embarrass Kenya and Africa at large just like she has done before.

“Raychelle Omamo was recalled as Kenya's ambassador to France by Foreign Minister Raphael Tuju because she had become an uncontrollable alcoholic and vagabond in Paris and a constant embarrassment to Africa.”

“That is her singular QUALIFICATION for the position of CS Foreign Affairs,” stated Miguna in a tweet.