MIGUNA MIGUNA barred from boarding a plane from Frankfurt Airport to Nairobi following an order from State House, Nairobi! 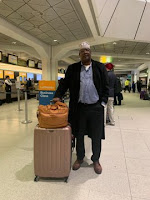 Tuesday, January 7, 2020 - Lawyer Miguna Miguna has been barred from boarding a flight from Frankfurt Airport to Nairobi after a red alert was issued saying he cannot board any flight to JKIA or any African country.

Miguna, who was expected in the country later on Tuesday, says he has been stopped at a flight check in at Frankfurt Airport and had been informed that there was a red alert and he cannot be allowed to board.

However, Government Spokesman Col. (Rtd) Cyrus Oguna has maintained that Miguna is free to travel to Kenya on President Uhuru’s assurance.

The spokesman further asserted that the Ministry of Foreign Affairs will handle the red alert issue raised by Lufthansa Airlines.