Merciless woman spotted beating her HUSBAND in public like a squirrel in the presence of their little son - Men are suffering in silence (VIDEO). 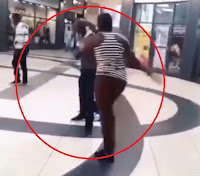 Tuesday, January 14, 2020 - A brutal woman caused drama in a shopping mall  after she unleashed her wrath on her husband  as the public watched.

The woman went berserk and started throwing heavy punches and hot slaps at her poor husband, who tried to control his anger despite his evil wife beating him like a small boy in public.

The helpless man was holding their baby as his wife continued assaulting him.

She couldn’t even feel ashamed beating her husband infront of their little son.

It took the intervention of some members of the public to stop the dirty fight before things turned ugly.
A lot of men have been suffering in silence in the hands of their abusive wives.

This man is among the thousands of men who are victims of domestic violence.