Media personality JANET MBUGUA exposes randy politicians keen to have SEX with her - They don’t care I have a family! 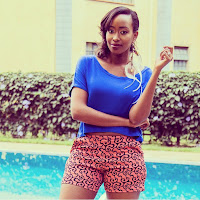 Friday, January 24, 2020 - Former Citizen TV news anchor, Janet Mbugua, has revealed that she has been approached by several politicians and colleagues for an illicit affair but she turned down their advances.

Speaking to a local radio station, Janet said that some of these randy politicians don’t give a damn if she’s married and has a family.

The mother of two also revealed that most TV girls are dating politicians and senior Government officials behind the scenes.

While she made it clear that she’s not judging anyone, she warned young ladies in the media to be careful because such affairs could ruin their careers in the long run.
“I don’t want to sit here and pass judgment but I do believe this is wrong especially if it is somebody who has a family.

“On principle its wrong but at the same time, it doesn’t mean that that woman should be abused or harassed or bullied. It’s a human rights violation.

“She needs to be educated better on the choices that she makes will come back and hurt her because the day you are older there will be a youngin and you will be kicked out.

“You can lose your credibility or even your job, you lose everything,” she said on Radio Maisha.

“How many politicians, how many colleagues in the media have approached me? So many. Did I say yes? No. Even when I am married and gotten kids.

“I just used to say point-blank that, ‘I have a family. Don’t you think what you are asking is wrong?’.

“It’s a choice. I just said that even if they can give me all the money in the world what will happen to me?

“There is no credibility I’ll have,” she added.