The Manda Bay attack was nothing, brace yourselves for more deadly attacks – AL SHABAAB now threatens to cripple Kenya for good even as the US vows to support UHURU

Thursday January 9, 2020 - Kenya and the US should brace themselves for more daring attacks in the coming days, Al Shabaab militants have warned, adding that "we shall target tourists".

In reference to the US Naval Base attack in Lamu on Sunday, the Somalia-based militants said Kenya "will never be safe", calling for more attacks against Washington and her allies.

The future attacks, Al Shabaab now says, will target tourists and US interests within East Africa, their news agency said.

According to Al Shabaab, the attack in Lamu on Sunday should serve as a warning and Kenya should immediately withdraw her soldiers from Somalia.
“Withdraw all your forces from our Muslim lands while you still have the chance.”

"Otherwise brace yourselves for the worst and prepare for perilous times ahead," warned Al Shabaab, who are linked to Al Qaeda.

The Somalia based militants said Kenya will never be safe and Kenyans will never sleep soundly at night.

“Tourists and travelers visiting the country are hereby warned that there will no longer be any safe sightseeing or safari trips in Kenya,” stated the Al Shabaab.

The United States has since deployed East Africa Response Force (EARF) to Manda Bay following the deadly raid on Sunday that left both countries with casualties. 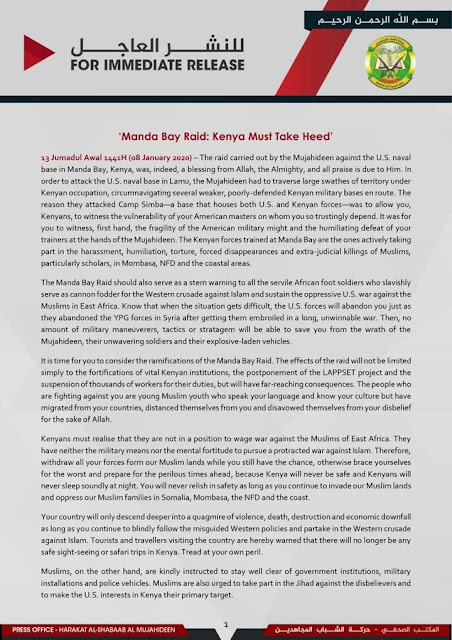 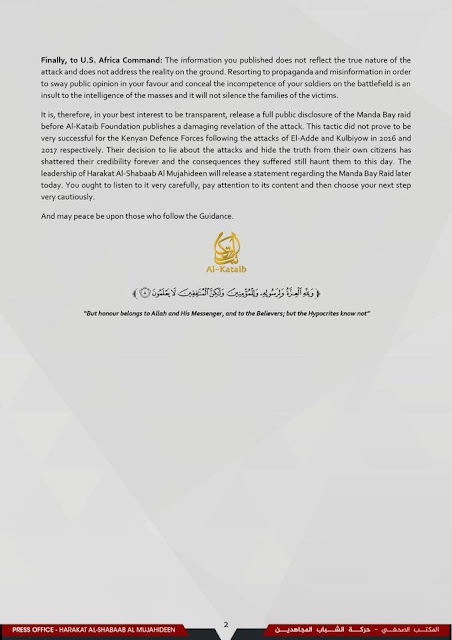