KIUNJURI should thank UHURU even after his sacking and not dare the President in an angry rant, he might forgive him and take him back in 2022 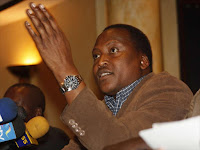 Onyonka opined that though Kiunjuri appears angry and is talking about hitting back at the President, Kenyans should not rule out seeing him working again with the President in 2022.

"The reality is, Kiunjuri could be talking about hitting back but you might be shocked that in 2022, he'd probably be working with Uhuru.”
“If I was him, I would finish the statement after the first paragraph," he said during an interview.

He also faulted the former CS over his speech after his sacking, observing that he should have only used the opportunity to thank Uhuru for entrusting him with the Cabinet job.

However, in his scathing speech, Kiunjuri proceeded to even declare that his sacking did not catch him by surprise and has even relieved him.

"I think Kiunjuri should have finished his speech on the first paragraph…When you are a substantive leader and your boss fires you, the dignity of that office requires you to thank the one who gave you that job," he added.