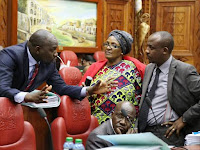 Taking to Twitter on Thursday, Murkomen who is also the Senate Majority Leader, argued that a High Court Judge cannot preside over the swearing-in of Deputy Governor, James Nyoro, as Kiambu Governor following the impeachment of Waititu.

“A High Court Judge cannot preside over swearing-in of DG of Kiambu to be a Governor before 10 days are over and before they Gazette the date, time and place for conducting the swearing-in Ceremony. But you know what? Everything is working like a clock in the new Kenya,” Murkomem said.
But Makueni Senator, Murtula Kilonzo Jnr, told Murkomen off and urged him to read article 182 of the current constitution.

“Boss, you and I approved this bill in reference to Assumption of office after a General Election. In Kiambu, a vacancy has occurred under Art 182 and the deputy shall assume office under 182(2)."

"Needless to say, I agree with you that we are back into a working nation,” Mutula told Murkomen.