In a statement on Friday morning, KQ said that flights to Guangzhou will be suspended from 31st January until further notice.

"... we have temporarily suspended flights to and from Guangzhou starting Friday 31st, January 2020, until further notice," part of the statement read.

This comes after the World Health Organization (WHO) declared the Corona Virus a global health emergency following the escalation of the virus that has been confirmed in more than 20 countries from its origin in China.
KQ had continued with its normal operations to China despite major airlines around the world including British Airways and Ethiopian Air suspending their flights to and from China.

Meanwhile, a student held in KNH on suspicion of having the Corona Virus has tested negative.

Health CS Sicily Kariuki said that the tests of the patient with flu-like symptoms tested negative.

The unnamed student, in his early 20s, arrived at the Jomo Kenyatta International Airport (JKIA) from Guangzhou on Tuesday at 9:30 am and was rushed to KNH by the Ministry of Health. 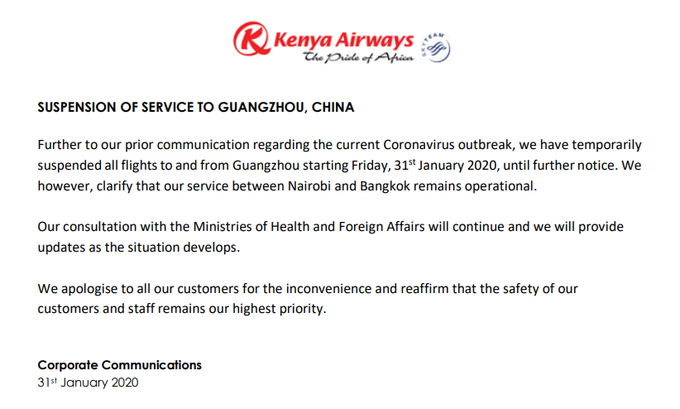