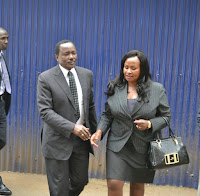 Tuesday January 14, 2020 - Former Vice President, Kalonzo Musyoka, is currently celebrating after one of his many girlfriends was appointed to President Uhuru Kenyatta‘s Cabinet.

During his State of the Nation address on Tuesday, Uhuru appointed former Kathiani MP, Wavinya Ndeti, as the Transport Chief Administrative Secretary.

Wavinya Ndeti is rumoured to have a special relationship with Kalonzo Musyoka who is married to Pauline Kalonzo.

Last year, Wavinya publicly said that indeed Kalonzo was handsome and the kind of man she still holds special in her heart.
She, however, regretted that the Wiper Party leader is already married and announced she is single and searching hoping to find a boyfriend soon, and will not hide the news from her family and Kenyans once she gets lucky to get one.

“’Propaganda will kill you son."

"If l remember, last time you said he was my boyfriend."

"The day I will have one, I will not hide from family and Kenyans."

"My PRINCE is still in my heart and by the way Kalonzo also handsome but married,’’ Wavinya said when a curious netizen asked her about her relationship with Kalonzo.