Jubilee Party is dead and Kenyans are waiting for its burial date, UHURU and RUTO are no longer friends – Jubilee Senator reveals 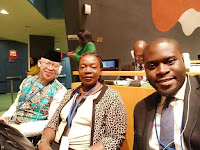 Monday January 13, 2020 - An outspoken Jubilee Party Senator has said that the Jubilee Coalition is dead and nobody should lie to Kenyans that there is something called unity in the ruling coalition.

In an interview with Citizen TV on Monday, nominated Senator, Isaac Mwaura, said that it is clear that Jubilee is divided.

"It is clear that Jubilee is divided into two parts and the party is over, we are just hanging by bootstraps,"
"They have been some challenges in Jubilee."

"Jubilee was never a party; it was some name, some song and two or three colors," Mwaura said.

Mwaura said lack of communication has increased the animosity in the party.

"It is very awkward."

"It is clear enough that there are people who support President Uhuru Kenyatta and another side supporting his deputy William Ruto," he said.

"We have been in denial for a long time."

"It is the end of Jubilee."

"If we go to elections the way we are it can be worse. "

For the past couple of months, the country has been presented with an amusing spectacle from the camps that have emerged in Jubilee, nicknamed Tanga Tanga and Kieleweke.