I saw it coming, I knew UHURU was after me after I declared support for RUTO - MWANGI KIUNJURI reveals after his unceremonious sacking yesterday 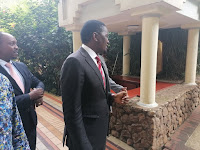 Wednesday January 15, 2020 - Former Cabinet Secretary for Agriculture, Mwangi Kiunjuri, has said his sacking did not take him by surprise.

As soon as he learnt about his sacking, which he watched on a banking hall TV that beamed President Uhuru Kenyatta’s address yesterday live, Mr. Kiunjuri was not the same again.

Kiunjuri, who had been driven to the bank along Nairobi’s Biashara Street in his official Land Cruiser V8, left in a different car, reportedly unaccompanied by his official security detail.

“The CS came in the V8 but left in a Mercedes Benz after learning of his sacking from the TV stations beaming the event live in the bank.”

“He had come to Equity Bank to withdraw money,” a witness said.

The witness added that Kiunjuri was heard saying:

“Hata hiyo gari sipandi (I won’t even enter that (official) car” as he jumped into the other one.
Later, Kiunjuri addressed a Press Conference where he thanked the President for relieving him of the stress he has been having every single day ever since he took Uhuru’s job.

“I have gone through a most difficult year that on a number of occasions threatened my energy and resolve.”

“Some of you know that I have endured a lot of humiliation… only God and my immediate family know how this made me feel.”

“I turn a new page, knowing very well that when God closes one door, He opens another.”
“I believe there is a door down the road,” he said.

He urged his supporters to stay calm, confident and not to cry for him.

“You know I’m resilient,” he stated.