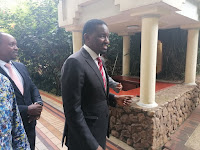 Prior to his appointment, Munya was the Trade and Industrialisation Cabinet Secretary.

Impeccable sources at State House said Kiunjuri was sacked over comments he made in Mathira during the funeral service of area MP, Rigathi Gachagua’s mother Martha Kirigo Gachagua last week.

In the burial, he urged Uhuru to honour the covenant he made with Dr William Ruto in 2022.

“Whenever we make a covenant, let us lead to the covenant.”
“Otherwise, there are consequences of breaking covenants,” Kiunjuri stated.

Kiunjuri, who is the former Laikipia East MP, stated that covenants have over the time proved to be dangerous if dishonoured, with those who fail to honour them ending up the victims.

On the other hand, he said that those who fulfill the covenants were rewarded with blessings, in reference to writings in the bible.