Here is the dangerous disease that COTU boss, FRANCIS ATWOLI, is suffering from - The old man is urinating on himself and should retire from public service!! 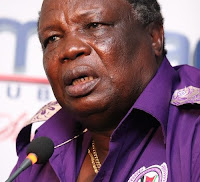 Thursday, January 16, 2020 - Central Organisation of Trade Union (COTU) Secretary General, Francis Atwoli is seriously sick going by the comments he made in Kakamega County on Wednesday.

While addressing the press on Wednesday ahead of the January 18th Building Bridges Initiative meeting at Bukhungu Stadium, the veteran trade unionist said that he is the third most powerful Kenyan after President Uhuru Kenyatta and ODM leader, Raila Odinga.

Atwoli said that he is also a member of the deep state, a phantom organization that decides on who should be the President of Kenya.

“I managed to assemble 1 million people here and gave Musalia (ANC leader) the seat.”
“In this country, we are only three people.”

“It is the President and national leader of this nation President Uhuru Kenyatta.”

“The other popular person is this country is Raila Amollo Odinga.”

“After that, you come to Francis Atwoli.”

“The rest are donkeys, "Atwoli said.

Atwoli’s comments show that he has dementia because in Kenya’s command structure, Uhuru is number one followed by his deputy, Dr William Ruto.

Raila Odinga is not anywhere near the country‘s top hierarchy.