Wednesday, January 9, 2020 - The Kenyan Government has refuted claims that powerful individuals within the Government are behind lawyer Miguna Miguna’s scuttled travel plans.

In a press statement, the Government stated that Miguna is free to travel back to the Country but before doing so, he must acquire the necessary travel documents.

According to the Government, Miguna was listed as “an unruly passenger” when he caused a scene in March 2018 at the Jomo Kenyatta International Airport (JKIA) during his dramatic deportation.

“As Government we wish to clarify that following the incident at JKIA in March 2018, Dr. Miguna was categorized as an unruly passenger in line with Annex 17 of International Civil Authority Organization (ICAO) standards and recommended practices that allow prohibition of unruly passengers,” reads part of the statement issued by Government Spokesperson, Col. Cyrus Oguna.

The Government further claims that Miguna’s conduct is a threat to the Category A1 status of JKIA that was awarded in 2017, allowing direct flights between the US and Nairobi.

“His unruly behavior was seen to have the potential of threatening category A1 status of JKIA which took the country a lot of effort and work to achieve. This category certifies that we have put in place all the necessary safety and security measures in all our airports. This is an accomplishment that we are committed to jealously protect,” adds the Government spokesman.
The Government insists that it’s willing to comply with the court ruling and facilitate his re-retry into the the country but he must obtain valid travel documents from any Kenyan mission abroad.

Here’s the full statement by the Government concerning Miguna delayed return to the Country. 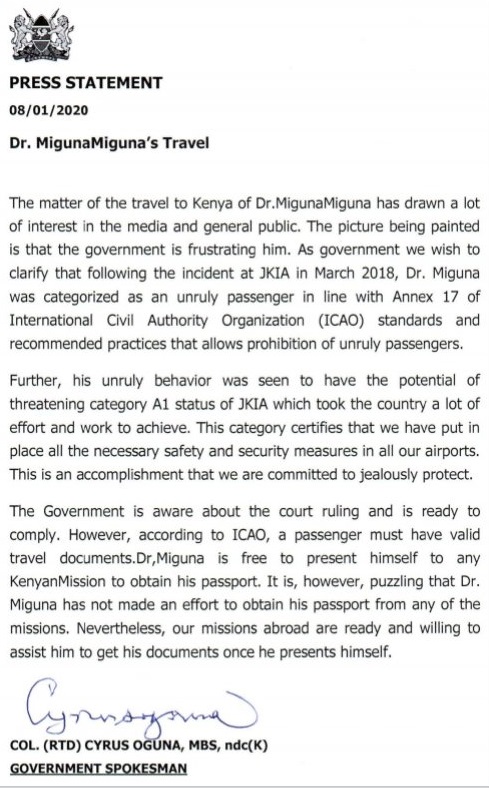